It has now been three years since Canada legalized cannabis consumption for recreational use all over the country. On October 17, 2021, it will be the 3rd anniversary of the momentous day when the Cannabis Act came into effect, ushering a novel era legitimizing cannabis retail in Canada and setting a precedent for the rest of the world.

Although the pandemic jolted the industry a bit, the declaration of cannabis retail as essential helped in normalizing consumption and accelerated growth. There is still a lingering stigma, but we have certainly come a long way with cannabis retail sales quadrupling from 2019 to 2021. This blog post highlights the key events and milestones of Canada’s legal cannabis industry in the past three years, with some forecasts and projections for the future. 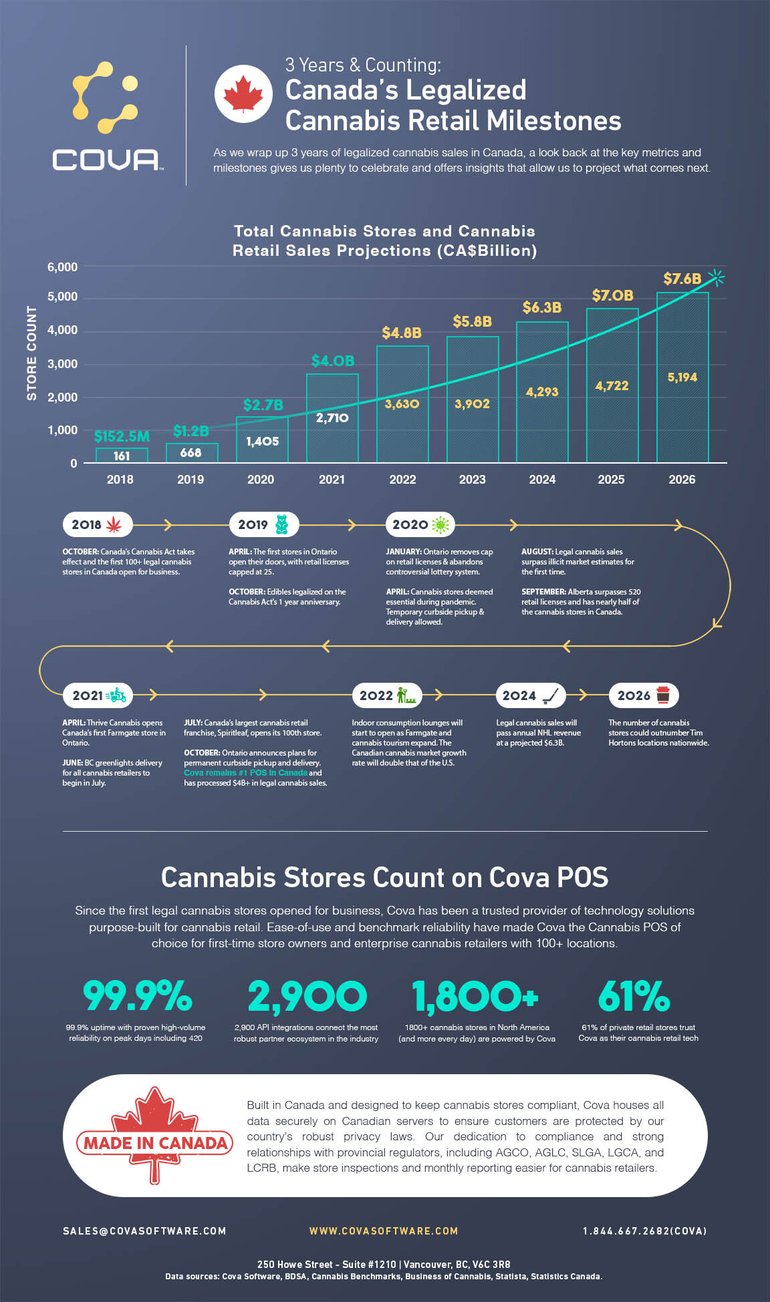 On October 17, 2018, the Cannabis Act came into effect and over 100 stores opened nationwide, including government-operated stores in most of the Maritime provinces and Quebec, and private cannabis retailers in Alberta, Saskatchewan, and Manitoba. BC initially opened only one government-run physical store in the geographic center of Kelowna, that also offered online ordering. Despite population and demand, Ontario chose to offer online sales only through April 2019.

With Ontario’s initial lottery system, only 25 stores were allowed to open with strict deadlines. The Hunny Pot Cannabis Co., the first cannabis retail store to open in Downtown Toronto, received its final approval with just 10 days to get things up and running. Cova’s world-class launch team played a significant part in the short turnaround. Against all odds, Hunny Pot Cannabis Co opened its doors at 9 am on April 1st. It was the only recreational cannabis store in the city of Toronto to meet the deadline.

On the first anniversary of legalization- October 17, 2019, the production and sale of cannabis edibles, cannabis extracts, and cannabis topicals became legal in Canada under the Cannabis Act. All these accounted for an almost 18% share of the CA$2.7 billion regulated recreational cannabis market last year, and the market share is projected to grow further as cannabis beverages take center stage.

Spring 2020 – ON opens up Canada’s biggest market; Cannabis declared essential during the pandemic

Ontario finally allowed cannabis retail stores to apply for provincial approval without limits, and the previous slow-moving measures used for the lottery system were completely abolished. Cannalysts Inc., an independent cannabis research firm estimated that the province lost out on a total of $325 million in economic activity, and over $50 million in tax revenue alone, during the first year of legalization.

Federal emergency orders that deemed cannabis retail essential and advanced technological solutions allowed retailers to pivot to online ordering, curbside pick-up, and delivery during the Covid-19 pandemic. In Ontario, a spike in COVID-19 cases prompted the government to close stores without a backup plan. Fortunately, a Cova-organized coalition of retailers persuaded the government to act quickly and temporarily allow delivery in the province.

Statistics Canada declared that Canadian household spending on recreational cannabis reached $648 million in the second quarter of 2020 and outpaced the illicit market for the first time, marking a significant milestone for the licensed cannabis industry.

In September, Alberta continued to lead the country with over 500 cannabis stores in the province and had nearly half of the cannabis retail stores in Canada. However, Ontario had the fastest-growing market and would surpass Alberta in the subsequent year.

In April 2020, Thrive Cannabis officially became Canada’s first provincially authorized farmgate retailer to open a store in Ontario. As other provinces streamlined farmgate regulations, Cova Software organized a webinar on How to Navigate Farmgate Cannabis Retail, where attendees learned about all the forces impacting farmgate cannabis across provinces and how Thrive quickly implemented the best cannabis retail practices with Cova’s help.

In June 2021, the government of British Columbia permitted all legal recreational cannabis retailers to deliver their products to customers from July 15, 2021. All authorized B.C. cannabis retailers can now offer direct delivery services and don't need a separate delivery license to render the same.

In October, Ontario, which had only implemented temporary measures due to Covid-19, announced plans to make cannabis delivery permanent. These decisions will go a long way in fortifying Canada’s cannabis retail industry.

Few outdoor consumption lounges have already opened up in Ontario. As the pandemic slowly wanes away and the world reverts to some normalcy, provinces will relax regulations and allow for indoor consumptions lounges soon. This concept, combined with tours at cannabis cultivation farms, will not just bolster the craft cannabis industry but also create a whole new industry of cannabis tourism, as the overall Canadian cannabis industry grows at a rate double that of the US.

Hoping For a Bright Future

As per recent news, cannabis retailers are still struggling to find access to basic financial services from banks, and there is still untapped potential in this sector. Despite all these challenges, we must continue to strive towards educating people and eliminating the barriers to growth. At Cova, we are dedicated to changing the narrative and negative stigma around cannabis consumption and setting a new standard for the cannabis retail experience.

To keep sales strong and keep their business running, cannabis retailers must keep adapting to survive and thrive. Cova is more than just a POS company, has been introducing new tech products and constantly expanding the cannabis retail tech ecosystem to help hundreds of cannabis retailers plan, set up, and run their stores successfully. Made in Canada and endorsed by all provincial regulatory authorities, Cova houses all data securely on Canadian servers to ensure customers are protected by our country’s robust privacy laws and keep their retail operations always compliant. Click below to start your journey with Canada's best cannabis retail technology company.

The cannabis industry’s most awaited event is finally here, and it is happening in the sin city from October 20th […]

How to Open and Run a Cannabis Dispensary in Illinois

7 Mistakes That Can Ruin Your Cannabis Retail Business

Cannabis retail is still a relatively new industry, and most progress has happened only in the last five years. As […]