12 Canadian Cannabis Retailers to Keep on Your Radar

In the same way that diners seek out certain restaurants for a particular type of experience — maybe a romantic setting, or a place to let their kids throw food at each other, or a menu that targets a specific diet — so do cannabis consumers search for a dispensary that meets their needs.

Just as we eat with our eyes and our other senses—as well as with our emotions—we often shop based on a set of criteria that expresses our moods, our demographics and our lifestyles. This is why cannabis retailers in Canada are focusing considerable cannabis branding efforts on the unique designs of their dispensaries. Some have transitioned from medical to recreational, while others were poised to start as soon as Canada ushered in legal recreational cannabis on October 17.

If you have a dispensary located in Canada, or if you want to open a cannabis retail business in Canada, here are the best existing and impending dispensaries to keep on your radar for their compelling designs and cohesive approaches to retail, including the ways that each artful conception echoes the company’s vibe and addresses the preferences of the cannabis consumer. 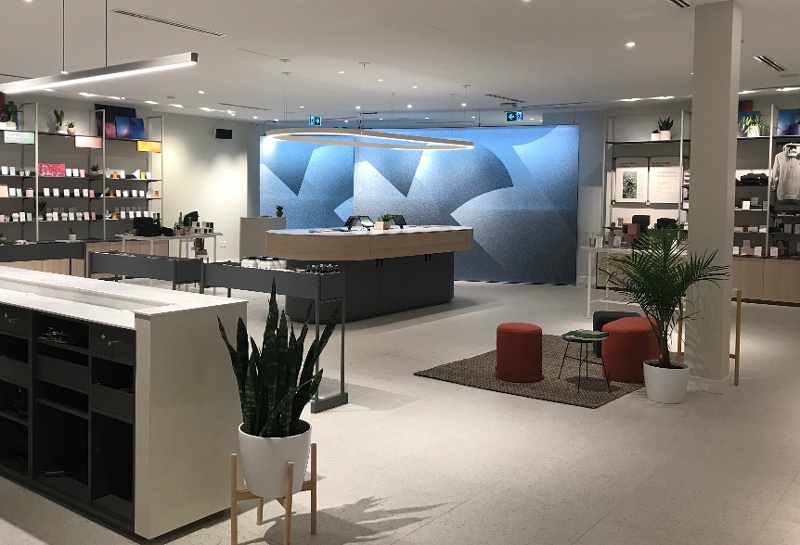 Their stated mission of education and a commitment to helping cannabis retail reach new heights puts Tokyo Smoke at the leading edge of the industry. Things like "higher learning" workshops for beginners (where they learn how to roll a joint, cook with cannabis, and keep a “strain journal” to track effects) as well as a well-fed Cannabis 101 blog not only keeps their guests knowledgeable, but also makes for a template of connectivity that would be wise to emulate. Additionally, the have a coffee shop presence: each shop is individually decorated with an overall warm and welcoming feel, and legalization will bring an expansion from Winnipeg, Toronto and Calgary to Hamilton, Vancouver, and Montreal. Their crazy-popular Instagram account is elegant, with slick and pro-quality photos.

As the first and only Canadian cannabis company granted a franchise associate membership, Spiritleaf has been there from the ground up, with 100 retail operations planned across Canada, pending approval. In keeping with the name and aesthetic—the parent company is called Inner Spirit—the sites will sport walls of wood arranged in an arrow pattern and locally sourced, indigenous materials. But what’s really fashionable about Spiritleaf is its commitment to community, starting with its five-year pledge to the Gord Downie and Chanie Wenjack Fund, as well as a Legacy room devoted to educating Canadians about the history of Residential Schools.

Led by a team of legal cannabis entrepreneurs and inspired by the internationally renowned interior designer Johnson Chou, Fire & Flower—which recently was awarded 37 retail store licenses in Alberta—has been addressing issues such as the need for standardization right from the start, with a focus on education-based programming and strategies that rely on experience and data. The community-oriented stores offer bright, well-lit spaces crafted from mixed woods and stonework, with display cases embedded in the walls and a polished, contemporary vibe warmed with live greenery. 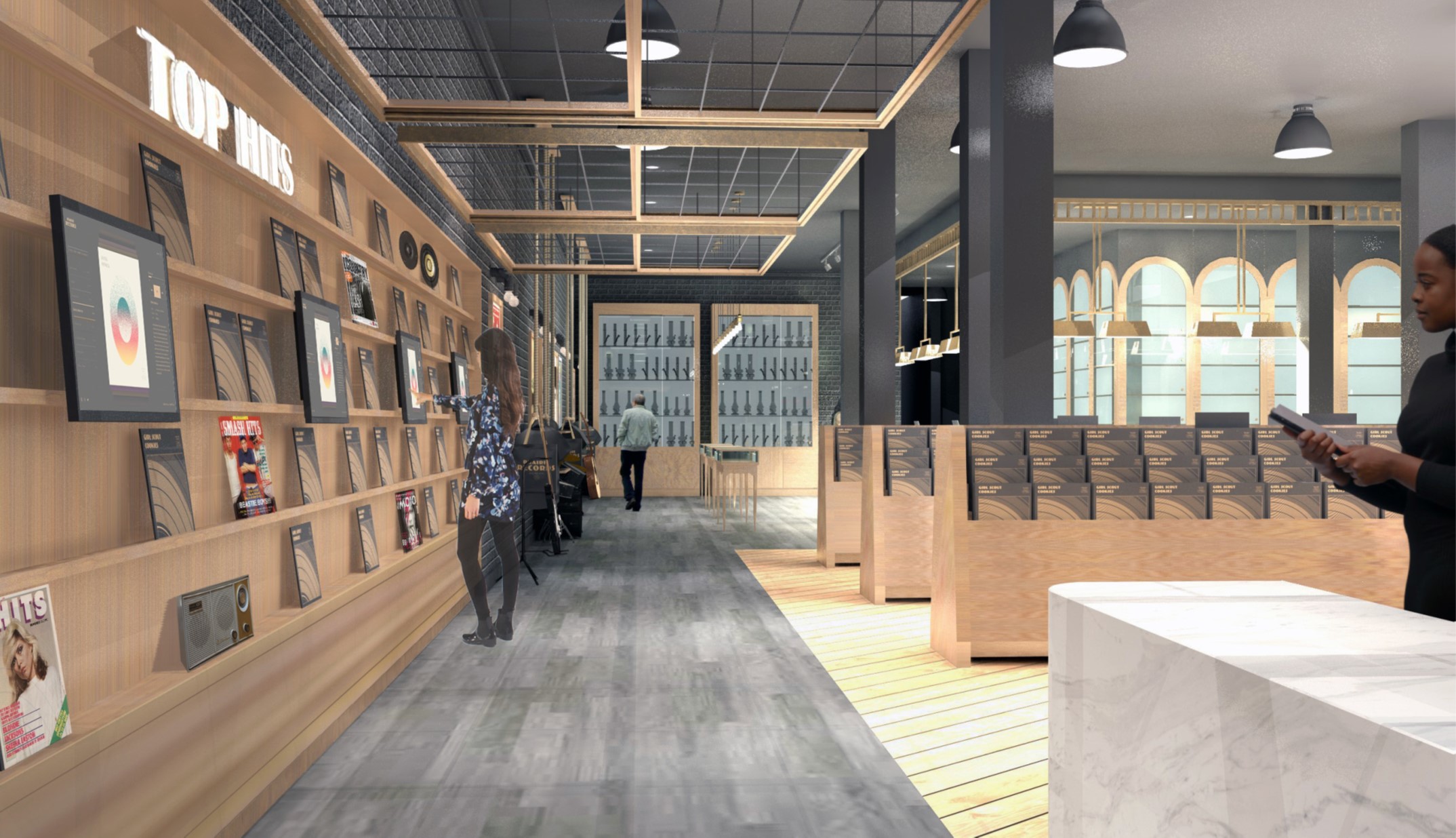 Westleaf promises to reinvent the cannabis purchasing experience through its retail banner, Prairie Records. With a tactile, musically themed shopping journey through record store style concept, Prairie Records invites consumers to Hit the High Notes and Get Lost in the Music.

Canna Cabana’s parent company, High Tide Ventures, has been in retail for more than a decade through its Smoker’s Corner shops, and that translates into experience-based approaches to their impending dispensaries in Alberta (37 stores) and British Columbia (8 stores). Renderings of the planned décor show glossy swirls of green and orange on the walls as a backdrop to contemporary display cases and shelving in metal, glass and wood.

With a target opening date of a month after legalization, Aura Cannabis has its eyes on Saskatoon, where—according to CBC Saskatoon—the Vancouver-based company will slowly integrate one of the city’s first dispensaries in the up-and-coming area of Riversdale. Aura executive vice president Andrew Gordon told the news outlet that he envisions an "inviting, socially responsible and compliant adult-use cannabis retail store," which has yet to be named but initially will employ “up to seven people” and will be located “in the space just west of Hometown Diner on 20th Street West.” 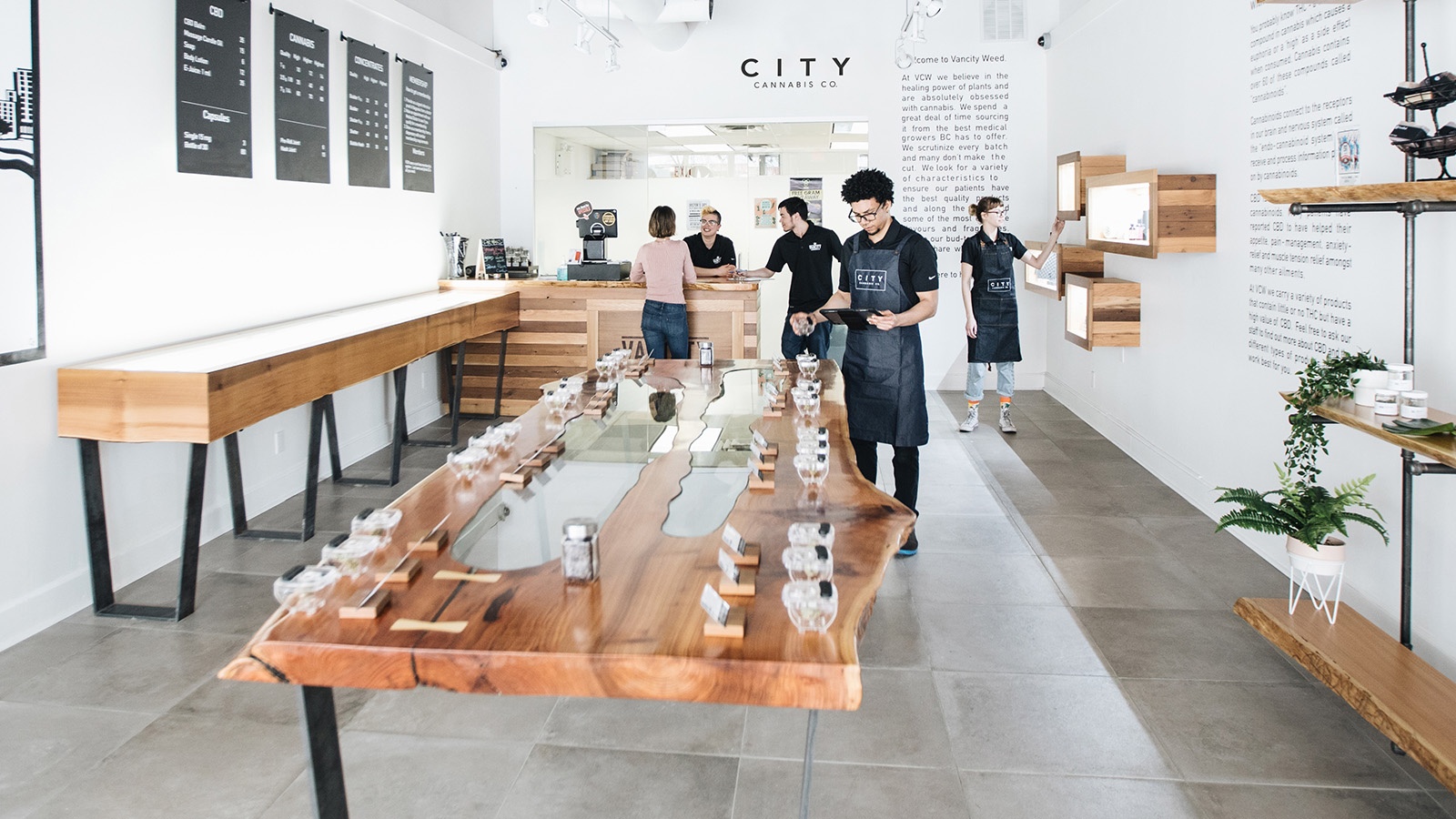 The owner of City Cannabis Co. (formerly known as Vancity Weed), Krystian Wetulani, made our list of Top 20 Canadian Cannabis Influencers to Follow Right Now, and for good reason: Drawing from a decade of experience with Starbucks, Wetulani was inspired to cultivate consumer-oriented and streamlined dispensaries that deliver high-quality products backed by science and education. Knowledgeable budtenders and well-documented strains elevate the experience—their two medical cannabis outlets in Vancouver received a Best of the City Best Dispensary award in 2016— and consumers will find that the City Cannabis’ concerted media outreach program offers further news they can use. Look for a similar minimalist setting with hewn wood tables and shelving backed by black-and-white walls and murals, and ferns and other foliage that add a homey touch. 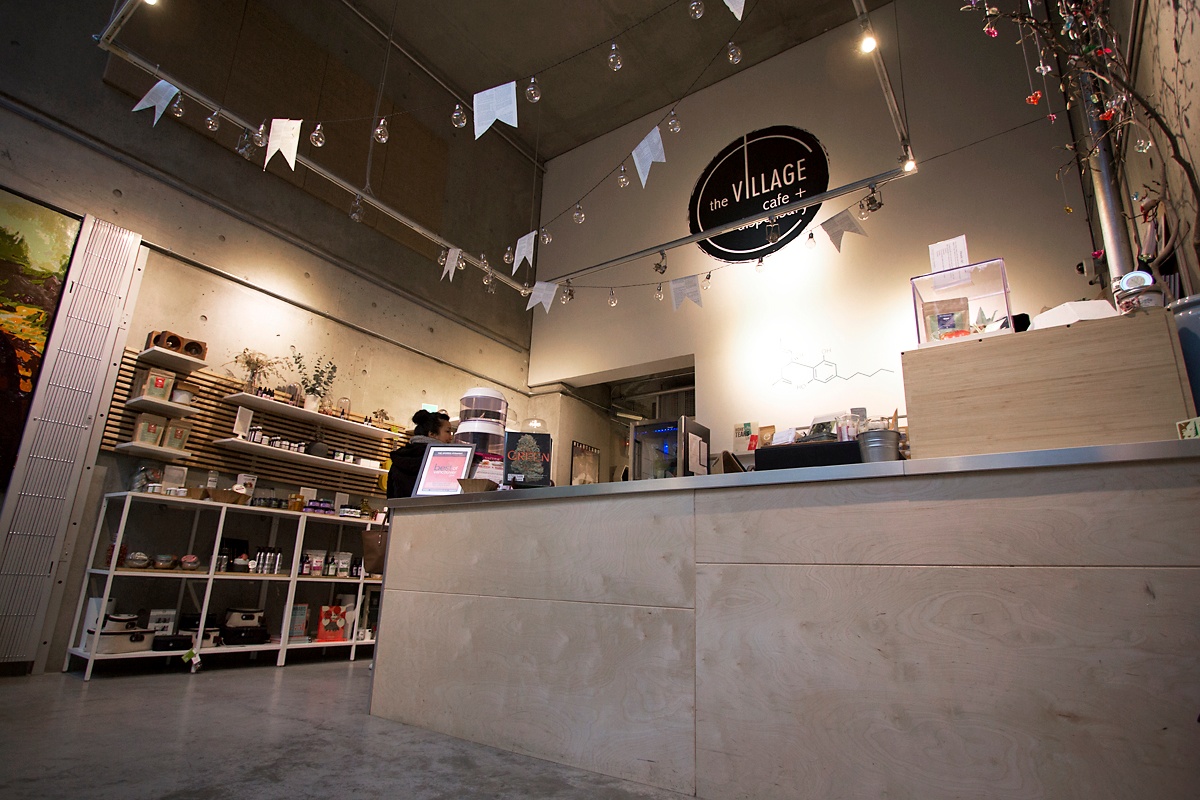 The whimsical setting—bright-yellow sidewalk furniture, multiple floor plants, artfully arranged and colorful product displays, and the welcome on-site coffee shop with its expertly crafted lattes—is almost in direct contrast to the seriousness with which The Village Bloomery takes its cannabis culture. Winner of multiple awards since opening its first medical dispensary in 2015 (including Lift Cannabis’ Top Dispensary 2016 and The Georgia Straight Best of 2017 award for “Dispensary Most Knowledgeable for Medical Use of Cannabis”), the Village Bloomery pays attention to details, offering things like a grinder and self-roll station and curating small-batch artisan cannabis strains, whose provenance can be insightfully related by any well-informed staffer

Formerly known as the Farmacy since it opened in 2015, the two renamed FARM locations in downtown Victoria still offer the same cool, old-timey setting—with its black soda fountain stools, gleaming apothecary-style display cases and groovy lighting—along with a robust roster of products. The dispensary’s focus on education is showcased in the Education Centre, a cannabis-free zone devoted to sharing best practices and research-driven information.

Started in 2013 in Vancouver, MMJ Canada still has multiple dispensary locations in the area, and has expanded to the Toronto area, as well. In all of their locales—the décor for which leans toward high-tech, like a friendlier Apple store—the core concept is to have in-depth discussions with the clientele to truly drill down to which of the anywhere from 25 to 40 strains of flower on hand will best fit a particular ailment or set of symptoms. That means their budtenders take extra time to pinpoint problems and talk through side effects.

What happens when a coffee company converts some of its cafes to retail cannabis? Good things, obviously:

Canada’s second-largest specialty coffee retailer has partnered with cannabis clinic operator National Access Cannabis to implement their combined brand of Meta Cannabis Supply Co. recreational dispensaries in select Second Cup shops, starting in Western Canada. Renderings on Meta’s website depict a sleek, modern and almost austere space bold with the company colors (a purple-deepened blue and an almost-neon fuchsia), and open floor plans with spacious aisles will make it easier for consumers to focus on one product at a time. It will be fascinating to watch both companies expand their retail footprint.

Striving to become a company that sets the benchmark high in cannabis-based apothecary, Canndara upholds the very highest standards when it comes to client experience, product education and the experience of cannabis retailing as a whole.

Take Your Dispensary Design to the Next Level

Cova can help you reach your goals of elevating and evolving your current dispensary space, as well as bringing a new dispensary to fruition. Request a demo of our robust cannabis retail POS software today.

Written by
Anne Forkutza
Anne Forkutza started her career in customer experience and digital strategy at the age of 18. Over the years she has utilized her skills to help deliver award-winning campaigns for big brands such as Starbucks, Electronic Arts, Nike, Nintendo and Loblaws. She also has years of experience combining business strategy with innovative product design while in various leadership positions at iQmetrix, a leading retail solutions company. As VP Strategic Partnerships at Cova, Anne is responsible for growing the Cova ecosystem with strategic partners who strive to collectively move the cannabis retail industry forward in a positive direction. She also played a key role in landing Cova’s top strategic accounts including: Tokyo Smoke, Spiritleaf, Donnelly Group, Fire & Flower, and Native Roots. Anne holds a Degree in Computer Sciences from Simon Fraser University.

This year was always going to be a 4/20 to remember. Prior to the global pandemic, that was for very different […]

How to Integrate Your Website and POS for Online Ordering Success

Ever since COVID-19 social distancing put the pinch on brick-and-mortar sales, online ordering has exploded in […]